I am very active on social media. I am part of a group on Facebook that loves to discuss theological topics. The group encompasses people of all different denominational backgrounds. Part of the beauty of this group is that it allows people to listen to other perspectives that are not their own.

A few years ago, a lady in this group posted a question, “If someone commits suicide, will they go to heaven or hell, if they are a professing believer?” We went back and forth for days discussing different angles. Catholics chimed in. Baptists chimed in. Eastern Orthodox believers chimed in. It was a fantastic conversation of back and forth views and challenges, until someone who knew the lady who posed the question chimed in.

Here were her words:
“(Name to be anonymous) posed the question, because she is considering suicide.”

In our back and forth of the facts, we (many of us pastors) had missed what was really going on and how our conversation was affecting this individual.

I believe that we often times have blinders in conversations and statements that we make. Our intention in our hearts may be good, and there might even be some truth to what we are saying, but who is listening and what are they hearing?

If you have been watching or reading the news, you will probably know how much the evangelical majority hopes to see Brett Kavanaugh make it into a seat on the Supreme Court. Recently Dr. Christine Blasey Ford has come out with allegations that Kavanaugh attempted to rape her and did grope her while he was drunk in high school.

Franklin Graham (son of famous evangelist Billy Graham), who always apparently has something to say on behalf of all evangelicals, had this to say about the allegations:

“There’s a lot of things that I’ve done when I was a teenager that I certainly am ashamed of and not proud of. People are up in arms over this like ‘oh, this is such a disaster.’ You’re talking about two teenagers 40 years ago. That has nothing to do with what we’re talking about today about this man being a judge on the Supreme court.”

I posted an article a few days ago about this from Relevant Magazine and here is what I said in the post: 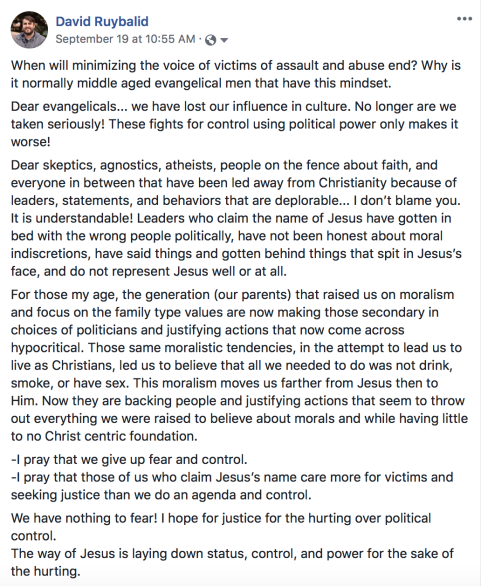 Here is a small portion of the comments that I received (all from professing Christians).

-“The key word is “accusations” and why is the opposition to the appointment of Kavanaugh trying to find incriminating evidence in old yearbooks? Sounds like a stretch to me.”
-“Healing is necessary if a crime was committed.”
-“nobody is saying that it isn’t wrong .. we are saying there is no proof.”
-“I don’t know whether it’s true or false all I know is a man’s reputation is destroyed even now even if he is confirmed and found innocent.”
-“This is all about politics. Not Jesus. (saying that seeing things through the lens of Jesus way is irrelevant in this situation)”
-“Why do these women wait 30 years to report? There seem to be political reasons behind this, there are no consequences for these women lying. How many people have done something 30 years ago that they regret? Why bring it up now?”
-So many more taken from the angle of a threatened political party…

I made the post not to make a statement against Republicans. I made the post in order to highlight a systematic problem in America around sexual assault and abuse, and how we as Christians have lost our voice and influence because we are part of the problem.

When we say things like, “Why do these women wait 30 years to report?” We shame victims for waiting to report (there are legitimate psychological and situational reasons why people wait). We also tell victims that have been holding a past assault secretly that they need to remain silent or they will be shamed.

Remember that when we make comments publicly, we have to be aware of the people who are watching and listening! Many people I know have been triggered by Franklin Graham’s response as well as similar responses within the evangelical community. It has been hurtful to many victims.

I am also proud of the victims, who in the last few days, have opened up and let their voices be heard about their experiences.

There is so much more that can be said, but not at this time!

Lastly, this is why I am passionate about this topic and why I am sickened by the ignorance of our society around this topic. I am more disgusted by evangelicals who perpetuate these problems and the American church who is part of the problem (both Catholic and Protestant).

May the voices of the people of movements like #MeToo, #ChurchToo, and #WhyIDidntReport bring God’s justice and help purify our land and our churches! 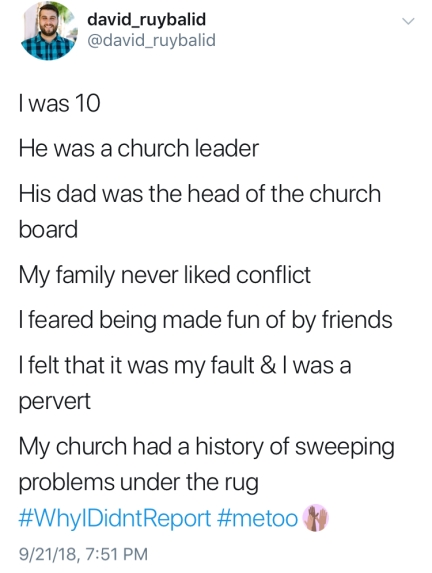 2 thoughts on “Franklin Graham’s Response to Dr. Ford is Harmful to so Many!”